Mollusks are invertebrates with soft, unsegmented bodies that are often protected by hard outer shells.
Mollusks have a thin layer of tissue called a mantle, which covers their internal organs. The mantle also produces the mollusk's shell. Most mollusks move with a muscular structure called a foot. The feet of different kinds of mollusks are adapted for various uses, such as crawling, digging, or catching prey.
Mollusks have bilateral symmetry.
A mollusk's internal organs include a pair of kidneys.
Most water-dwelling mollusks have gills.
Gills are attached to the mantle and have a rich supply of blood vessels.
The gills of most mollusks are covered by tiny, hairlike structures called cilia. The beating movement of those cilia makes water flow over the gills.
Many mollusks have an organ called a radula, which is a flexible ribbon of tiny teeth. Acting like sandpaper, the tiny teeth scrape food from a surface such as a leaf.
Biologists use the arrangement of teeth in the radula to help classify mollusks.


Snails and Their Relatives

Biologists classify mollusks into groups based on physical characteristic such as the presence of a shell, the type of shell, the type of foot, the arrangement of teeth in the radula, and the complexity of the nervous system. The three major groups of mollusks are gastropods, bivalves, and cephalopods.
Most snails have single, coiled shell, while many slugs have no shell. Gastropods usually creep along on a broad foot. Gastropods get their name, which means "stomach foot", from the fact that most of them have their foot on the same side of their body as their stomach.

Clams, oysters, scallops, and mussels are bivalves, mollusks that have two shells held together by hinges and strong muscles. Unlike other mollusks, bivalves do not have radulae. Instead, most are filter feeders; they strain their food from water.

Octopuses, cuttlefish, nautiluses, and squids are cephalopods, mollusks whose feet are adapted to form tentacles around their mouths.
Cephalopods capture food with their flexible, muscular tentacles. Sensitive suckers on the tentacles receive sensations of taste as well as touch. A cephalopod doesn't have to touch something to taste it; the suckers respond to chemicals in the water.
Cephalopods have large eyes and excellent vision. They also have the most complex nervous system, including a large brain, of any invertebrate.
All cephalopods live in the ocean, where they swim by jet propulsion. They squeeze a current of water out of the mantle cavity through a tube.
at Friday, January 26, 2018 No comments:


Condensation
A change from the gas state to the liquid state is called condensation.

As the thermal energy of a substance increases, its particles spread out and the substance expands.
The expanding of matter when it is heated is known as thermal expansion.
at Wednesday, January 24, 2018 No comments:

Sponges
Like plants, adult sponges stay in one place. But unlike most plants, sponges take food into their bodies. They have been on Earth for about 540 million years.

Structure of a Sponge
The body of a sponge is something like a bag that is pierced all over with pores.

Getting Food and Oxygen from Water
Sponges feed by straining food particles from water.
A sponge gets its oxygen from water too. The water contains oxygen, which moves from the water into the sponge's cells in a process known as diffusion.

Spikes
The soft bodies of most sponges are supported by a network of spikes.

Sponge Reproduction
Sponges reproduce both asexually and sexually.
In budding (one form of asexual reproduction), small new sponges grow from the sides of an adult sponge. Eventually these tiny sponges detach and begin life on their own.
Sexual reproduction - sponges do not have separate sexes - a single sponge forms eggs at one time of the year and sperm at a different time. When a sponge produces sperm, the water currents that move through the sponge carry sperm from the sponge into the open water. The sperm may then enter the pores of another sponge and fertilize egg cells in that sponge. After fertilization, a larva develops.
A sponge larva is a hollow ball of cells that swims through the water. Eventually the larva attaches to a surface and develops into a nonmoving adult sponge.

Cnidarians
Jellyfishes, sea anemones, and corals are cnidarians.
Members of the phylum Cnidaria are carnivores that use their stinging cells to capture their prey and defend themselves. The stinging cells are located on the long, wavy tentacles.
Cnidarians have specialized tissues. Movements are directed by nerve cells that are spread out like a spider web, or net. This nerve net helps the cnidarian respond quickly to danger or the presence of food.
Cnidarian Body Plans
Cnidarians have two different body plans. Both plans haver radial symmetry.
Polyp is shaped something like a vase, with the mouth opening at the top. Most polyps do not move around attached to an underwater surface.
Bowl-shaped medus is adapted for a free-swimming life. Medusas, unlike polyps, have mouths that open downward. Some cnidarians go through both a polyp stage and medusa stage during their lives. Others are polyps or medusas for their whole lives.

How Cnidarians Feed
A cnidarian captures its prey by using its stinging cells to inject venom, then the cnidarian's tentacles pull the prey animal to its mouth. From there the food passes into a body cavity where it is digested. Understand food is expelled through the mouth.

Cnidarian Reproduction
Cnidarians reproduce both asexually and sexually. Polyps, budding is the most common form of asexual reproduction. In some polyps the entire animal splits into pieces. Each piece then forms a new polyp.
Some species of cnidarians have both sexes within one individual. In other, the sexes are in separate individuals.

Life on a Coral Reef

Coral reefs are built by cnidarians. At the beginning of its life, a free-swimming coral larva attaches to a solid surface. The coral polyp then produces a hard, stony skeleton around its soft body.
The coral polyp reproduces asexually.
at Saturday, January 13, 2018 No comments: 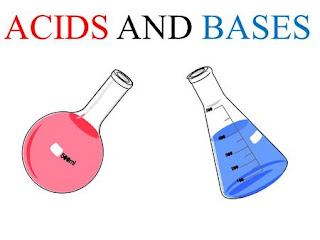 Properties of Acids
An acid is a substance that tastes sour, reacts with metals and carbonates, and turns blue litmus paper red.

An acid is any substance that produces hydrogen ions (H+) in water. It is the hydrogen ions that cause the properties of acids you can see. For instance, when you add certain metals to an acid, hydrogen ions interact with metal atoms.


Sour Taste
Although sour taste is a characteristic of many acids, it is not what should be used to identify an acid.


Reactions with Metals
Acids react with certain metals to produce hydrogen gas. Acids are as corrosive, they "eat away" at other materials.


Reactions with Carbonates
When acids react with carbonate compounds, a gas forms, the gas is carbon dioxide.


Reactions with Indicators
Indicator, a compound that changes color when in contact with an acid or a base, acids always turn litmus paper red.


Uses of Acids
In solution, acids often look like water, but they react very differently. A concentrated acid can burn a hole in metal, cloth, skin, wood, and other materials.

acids and Food
Many of vitamins in the foods you eat are acids.

acids in The Body
Acids are useful in the body and are also waste products of cell processes.

acids and Industry
Farmers and manufacturers depend on acids for many uses.
Sulfuric acid is used in car batteries, to refine petroleum, and to treat iron and steel.
Nitric acid and phosphoric acid are used to make fertilizers for crops, lawns, and gardens.

Properties of Bases
A base is a substance that tastes bitter, feels slippery, and turns red litmus blue.

A base is any substance that produces hydroxide ions (OH-) in water. Hydroxide ions are responsible for the bitter taste and slippery feel of bases. Hydroxide also turn red litmus blue.

Slippery Feel
Strong bases can irritate or burn your skin.

Uses of Bases
In solutions, bases sometimes look like water, or they may be cloudy white. Some bases cam burn your skin.

bases in The Home
Ammonia solutions are safe to spray with bare hands, but gloves must be worn when working with drain cleaners.

bases and Health
Bases such as milk of magnesia (magnesium hydroxide) and calcium carbonate help ease effects of too much stomach acid.

One product of the reaction is water. The other product is potassium nitrate (KNO3), a salt. Potassium nitrate is written in the equation as separate K+ and NO3- ions because it is soluble in water. A neutralization reaction produces water and a salt.
at Friday, January 12, 2018 No comments:

Animals are many-celled organisms that must obtain their food by eating other organisms. In addition most animals reproduce sexually and can move from place to place.

Animals need to obtain water, food, and oxygen from their environment, or surroundings. Animals need water because the chemical reactions that keep them alive, take place in water. Food provides animals with raw materials for growth and with energy for their  bodies' activities, such as moving and breathing. To release that energy, the body's cells need oxygen. Some animals get oxygen from air; others absorb it from water.
An animal also needs to be able to respond to its environment - for example, to find food or to run away from danger.
Adaptation is a characteristic that helps an organism survive in its environment or reproduce.

A vertebrate is an animal that has a back bone.
Fishes amphibians, reptiles, birds, and mammals.
at Thursday, January 11, 2018 No comments:

Power is the rate at which work is done or the amount of work done in a unit of time.

The unit of power is joule per second (J/s). This unit is also known as the watt (W).
One watt of power is produced when one joule of work is done in one second.

Power and Energy
Power is the rate at which energy is transferred from one object to another.